A Reason To Live

“A Reason To Live” (R2Live) was founded by Jerry Perera, in the immediate aftermath of the Boxing Day 2004 Tsunami.

R2Live provides assistance to people in Sri Lanka who were displaced or made homeless as a result of the Tsunami.

Heart Reach Australia is works in partnership with R2Live by sharing resources and programs. Working together we can better meet the immediate needs of Sri Lanka, especially the needs of people in the remote regions of the East Coast. The pain and anguish that these families are still having to face is something that is difficult to understand for those who have not seen it first hand.

Donations to R2Live through HRA are tax deductible. Aid and resources given to R2Live will be overseen by HRA, and used in programs as determined by current needs.

Following the Tsunami R2Live found that forwarding our collections and contributions to local government agencies for distribution was undesirable, as doing so deprives us of control over who should receive assistance. Instead, we decided to focus on Tirrukkovil, a small village on the East coast of Sri Lanka. This village had suffered considerably from the Tsunami, with many people stranded for long periods of time without food, water, or shelter.

Once the Aid organizations had established camps in the region and began providing immediate relief, and later housing, we at R2Live decided to throw our weight behind a local organization. This organisation focusses on empowering Tsunami-affected people, especially women, by offering training in trades and skills so they can earn a wage. 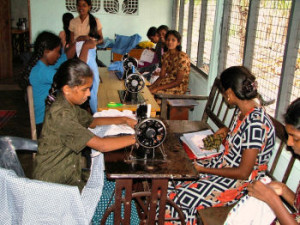 We helped with the establishment of a school where handloom weaving is taught. Here, girls who have never been to work are taught the skill of weaving. They learn to produce sheets, coverlets, table spreads, bath mats and other similar items. Over the years this service has developed to professional levels and we now import the products from this weaving centre and market them in Australia through Church fairs and “car boot sales”. In Sri Lanka, the products are sold in handicraft shops and through local schools, etc.

R2Live also works with a boys’ orphanage attached to the Methodist Church. More than 30 lads from ages 7 to 18 years are resident. A number of these were orphaned by the ethnic war or the Tsunami. The boys are educated at a local school, and are clothed and fed by the generosity of donations from well-wishers.

Following the demise of the Tamil Tiger rebels in 2009 many refugee camps were erected by the Government, and many of the displaced Tamil population in the North were placed in these camps. R2Live, in response to a call from the Methodist Church of Sri Lanka, started a collection to help the Church feed some of the infants in one particular camp by supplying them with milk foods.

Now that the rehabilitation of these displaced people is almost complete we will re-focus on Tirrukkovil where a great deal of work remains to be done.Donations and other funds collected will go primarily to the boys’ home where much work needs to be done to improve their living conditions.

In the years since the tsunami ravaged the coastline of Sri Lanka, most people have now put the disaster behind them and are carrying on with their lives.

But Sri Lanka has undergone major political changes during these years. After several years of peace the rumblings of war between the Tamil Tigers and the Pro-Sinhalese Government have once again been heard, creating a feeling of unrest in the country.

It is in this climate of unrest that Heart Reach Australia, through R2Live, must operate. Over the coming years, the focus is on the town of Tirrukkovil, a village on the East Coast of Sri Lanka, which was devastated by the tsunami. Although many aid organisations and NGO’s have been busy rebuilding homes and lives in the South of Sri Lanka, this town and many like it on the East Coast has received little assistance. Poor access into the area, and the ethnic war, are just two factors that have contributed to this situation.

HRA’s focus will centre round the people of Tirrikkovil, developing new programs, and consolidating those already initiated. One of these is the industries, that incorporate a training centre, and the weaving of fabric using the large weaving looms that have been bought by HRA and partners. Through training, the women of this town are now able to earn a modest income. The garments made will be sold through our organisations. The money earned will help the people rebuild their lives and achieve a sense of independence and self-worth.

Our second project is to work with the Methodist Church in Tirrukkovil in finding sponsors for the many orphans and displaced children. The Peter Brock Memorial Child Sponsorship Program is central to this project, and will be ongoing.