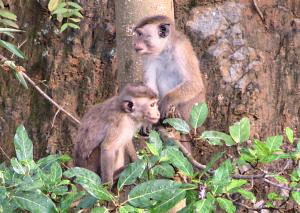 Update 2011/2012
Heart Reach Australia continues to operate in Sri Lanka, through the HRA ‘umbrella’ organization, ‘Reason to Live’. The SL Director, Jerry Perera gave this 2011 report:
“R2Live was formed initially to assist the people of Tsunami ravaged Sri Lanka but due to the shift in circumstances we are now less focused on this single project and we look further afield to assist people wherever and whatever their needs may be.
In 2011 we helped many families with homes and land so that they could be free of the tyranny of debt and forced borrowings at black-market rates, which has kept them constantly in debt and starving. For example,  in Sri Lanka we identified a family, where the bread winner had fallen off a roof and was confined to a wheelchair. He was living with his wife and two boys aged 16 and 12 in one room, surviving on his wife’s income of Rs 3000 (US$30 ) per month of which Rs1000 was paid straight out as rent. Besides the hand to mouth existence, this family had no privacy as all four lived and slept in one room. We have changed his circumstances and purchased for him a large block of land where he and his family can now slowly build a home for themselves as well as have room to grow their own fruit and vegetables.

R2Live has also done the same exercise in the Philippines where we have visited families in the slums of Manila and convinced them to go back to their home provinces where some of them still own land and encouraged them and helped them to scientifically grow more food and become independent financially. We have helped people to start small businesses and cooperatives so as to make them self sufficient on their land and prevent them from falling into the common trap of poverty that befalls all hopefuls who move into the big cities looking to make their fortune. We are currently working with families to set up cooperatives using natural resources to generate income.

We were approached by  a family where a child was born with a club foot and helped the child have surgery to correct the foot. He is now having post surgery treatment with special shoes to further correct his impediment. We have helped a number of people in dire need and helped them to change their lives and start micro businesses.
The highlight of 2011 was the collection of items mainly, equipment for people with special needs (donated from many branches of Yoralla in Victoria), children’s toys, bicycles, clothing and an array of household goods shipped in a container to Vanuatu. This was cleared and distributed to the needy of that country. R2Live intends to conduct a second collection in 2012 to send a second container to that country as the needs of the people are great.

We are also collection or a container to Thailand as many were left homeless and with only the clothes on their back after the heavy floods were experienced in Bangkok and north of Bangkok. We have already collected many items of clothing and look for more household items and clothes so we can assist those who have lost everything in the floods.
We have lost many supporters and manpower as the Tsunami dimmed from our memories, and a consequence of this was that we could not maintain our own web site. We still however, work actively under the umbrella of Heart Reach Australia recognising that we in Australia have a great standard of living and that we must never forget our less fortunate brothers and sisters living and struggling for survival in neighbouring countries.”