HRA have been setting up many programs aimed at alleviating poverty, and bringing health, education and a quality of life to the millions of poor in Vietnam, especially the children. These programs have seen tremendous benefits to hundreds of poor families in the Mekong Delta, Central Vietnam, and several other remote highlands provinces. 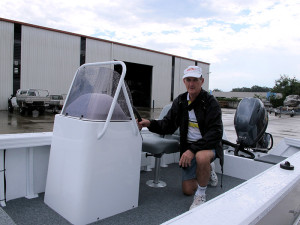 Our current focus on water safety, road safety and hygiene, has made us look at the demographics of the thousands of families involved. Vast numbers live on or near water. Most cannot access medical care in emergencies. Road transport is too often not possible. There are a number of locations in Vietnam where this scenario is all too common. It is for this reason we decided to design and build Vietnam’s very first MEDICAL AMBULANCE BOAT, and locate it in Thanh Hai area OF Ben Tre Province.

As Director of HRA, Chris O’Dempsey was the first person to sign an agreement with the Vietnamese government as a medical and humanitarian NGO charity back in 1990, when the country was very much ‘third world’. This respect and agreement has allowed us to bring much needed medical and humanitarian aid to thousands of poor families over the 25 years. Based on this experience, and the trust built up with Heart Reach Australia and the Vietnam health offices, this program is both a logical and critically needed next step is assisting poor families, many who live on or near the waterways.

This vessel is specially fitted out for our Heart Reach Australia / Heart Reach ‘Vietnam’ RAPID RESPONSE water based rescue service, an extension of HRA’s medical charity programs, and will be used to access remote regions and flood prone areas in the Mekong Delta region in Vietnam. The first vessel (hopefully others can follow given funding) will be based at the bottom of Ben Tre Province, in the Thanh Hai Island area, accessing their Medical Clinic, linking them to the mainland, and being a rapid Response water based Ambulance that can make emergency trips on rivers and canals far faster than the traditional road systems. This is an exciting challenge, and one that we have been working on in unison with our Vietnam partners for over two years. This vessel will be given immediately it arrives (planned December 2015, funds permitting) to the Ben Tre Health Office. We are satisfied maintenance of the vessel, safety and daily running, can be done according to Australian standards of operations. (HRA will be training all personnel involved with use of the vessel and medical equipment prior to operation.)

With the costs having been continuously raised in both Vietnam (mainly through our sponsors Harley Davidson Saigon, and new World Saigon Hotel, and from donations in Australia over two years, we are still needing operation and running costs for the first year of operation. Sponsors and donations are welcome.

The STESSCO boat (pictured) is an adaption of the very stable Bass fishing vessel.. and is extremely stable for transit of patients and access to rivers and canals in most water and weather conditions.